This job grew out of the owner purchasing a new "all in one" TV from Falcon Technology.  Previously he had a normal domestic TV converted to run on 12V, A Megasat fully automatic satellite system with decoder box, DVD, Surface mount USB  ports, IR remote repeater, HDMI switcher as well as an Amazon Fire Stick.

The new TV has DVD and satellite decoding onboard so those items can be dispensed with and at that point the customer decided to let us rationalise the whole installation.  Whilst everything in the existing installation worked ok, it was clear that as things had been added over time, the installation had got messier so we decided to rip everything out and sort out what was needed.

As the Falcon TV has multiple HDMI inputs, the HDMI switcher was no longer needed so it and its power supply were removed.
The new TV has the satellite decoder built in so the old decoder and power supply were removed
The TV remote control is used for all TV features so the remote control repeater system was no longer needed therefore it and its power supply were removed.
The USB sockets were trimmed down to two and relocated to the top of the cupboard, freeing up shelf space.
As the wiring was rationalised it became clear the large fused distribution board was no longer needed so that was removed too.
The Megasat Satellite controller is still needed as it is this that finds and locks on to the satellite, but as there was now space for it in the main cupboard, it was relocated.​ 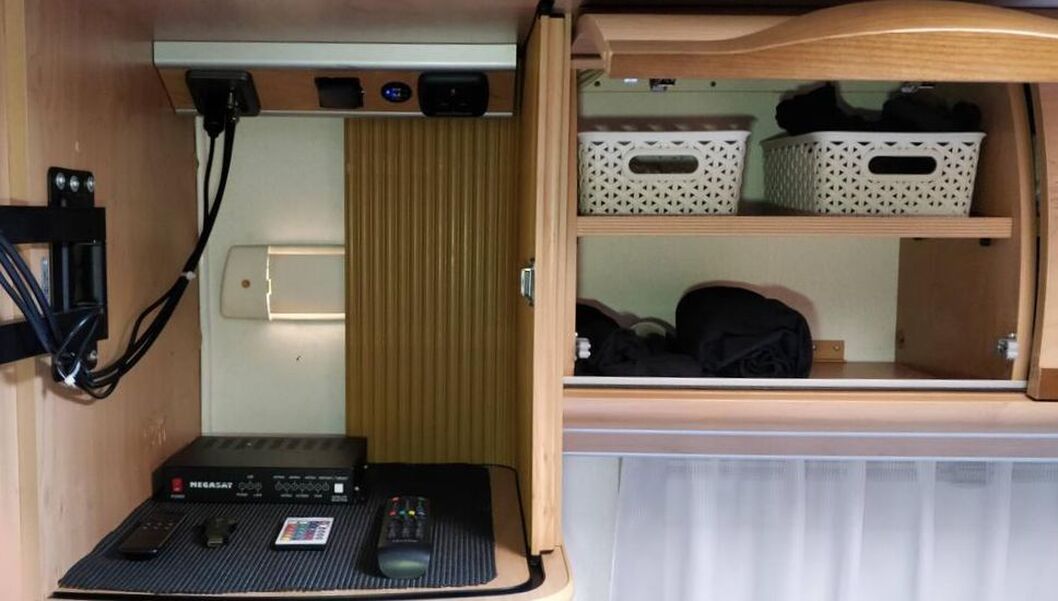 We fitted a socket that has a combined 12v, Ariel and Satellite outlet and then made up leads to connect from there to the TV, this makes for a professional look and the TV and wiring can be easily removed if the vehicle is sold.  A main switch was added to turn all electrics to the items in the cupboard on or off as needed.  A twin USB port was also added.  As can be seen the cupboard top right can now be used for normal storage now the DVD etc have gone.

The TV is mounted on a cantilever arm and fits completely inside the cupboard when travelling, though is fitted on a quick release mounting so could be removed if needed.